David Smaldone and Seth McCourt reported to Emery County Commissioners in a previous meeting that Bronco Mine is producing and selling coal.

Bronco Utah Operations has secured a contract for 100,000 tons of coal per year. According to the duo, the coal produced in the former Consul Mine three miles south of Emery is high quality with low sulphur and ash.

In the permitted areas, the coal reserve is at least 29 million tons. The first day of operations was June 22 and since its inception, Bronco Mine has garnered 73 employees.

“Located just outside Emery, Utah, Bronco Operations provides quality coal for our customers while priding ourselves on providing safe and quality jobs for our employees,” Bronco shared.

Construction on the mine began in 2015 and, with the exception of the office, is a new mine. The old defunct mine is north of the new mine.

“President and CEO of the mine, Dan Baker, decided to buck the trend that had plagued the industry,” Bronco’s website shares. His catch phrase has been recorded as “no guts, no glory.”

Baker felt that the quality of the coal and amount of the reserve was a great opportunity, so he and other investors pressed forward when others thought it could not be done. Then, when President Donald Trump signed the executive order on energy production, the future shined brighter for the coal industry, urging Baker and the investors to take the plunge.

Now, Bronco is striving to fulfill its mission statement, which is to provide the safest and lowest cost producer of product to its customers. Customers are welcome to visit Bronco Mine to purchase high quality lump coal and stoker coal directly from the mine site. 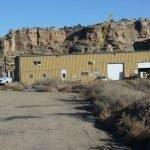