Reed Phillips, the owner of local eatery Big Moe’s, recently opened a new place of business where people can go to enjoy a different taste of food.

Squiggy’s Hot Dogs and Subs is now open for business on Main Street in Price. Phillips has owned Big Moe’s for 11 years and wanted to open this new restaurant so that his children would have a place to work when they were finished with school each day. Phillips stated that he wanted to do a business that provided only hot dogs and subs because no one else in town has done something of such nature. He stated that he enjoys owning food businesses because everybody likes good food.

“You want to hear how good you make somebody feel,” said Phillips.

Phillips has six children, two of whom are still at home; the rest are grown and live elsewhere. Phillips himself has lived in Price for 15 years.

The recipes for all of the subs provided at Squiggy’s are from a man that Phillips knows from Pennsylvania. He states that is a different taste than anything else out there. Subsequently, the Chicago dogs are all from back east. Phillips is working to bring some back East culture to the West Coast. He has never personally lived back east, he simply likes the culture there and the different feeling that it gives. The gentleman with the recipes for the sandwiches allowed Phillips to visit his hometown, and he stated that he was impressed that every other store on the town’s main street would be a deli. It is a big theme in the east, with more mom and pop stores than corporate franchises.

The reason that Phillips enjoys the culture in the east more is the close-knit feeling that is brings. He likes to know his employees personally. He explained that he was in the corporate world for 25 years and wasn’t a fan of the way that the world ran there. Small businesses are the more one-on-one and you get to know your customers, he said.

Although Phillips has his family working in Squiggy’s, he does hire others in the community. The hot dogs provided are all 100% beef and 95% lean, and they also make all of the hoagies that are used for the sub sandwiches. The décor inside of Squiggy’s is inspired by the ‘80s.

“That was a lot better time in my book than now,” informed Phillips.

The grand opening for Squiggy’s will take place sometime in January. When you visit the shop, you can mention that you read this article and receive 10% off of your purchase. 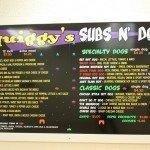 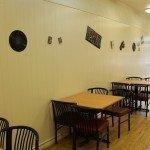 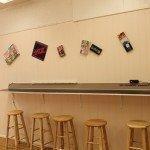 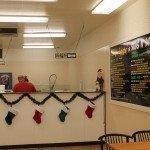