They explained that Emery School District previously approved a 75% rate for five years, descending after that every five years according to their occupancy rate. They reported that this would be a $5 million investment.

Tax incentives of 40% were then approved for Green River 1, Green River 2 and Pivot 13 solar projects that are to be built by the town of Moore. The Hornshadow Project was given the same approval for a 40% tax incentive. This solar project is slated for areas between Castle Dale and the Lawrence junction.

Powell also requested a letter of support for the Business and Technical Assistant Grant. He spoke to them about the technical support stations at the Green River and Orangeville libraries. This would be a one-to-one matching grant, but with the new building for the SEUALG, the plan was to use the old building to match some of the grant. The commissioners approved a letter of support.

After hearing from JCI representatives about a possible discount for Emery County citizens who do not have supplemental medical insurance, the motion to table the item was made and passed. More information is necessary before taking action.

Emery County was declared a drought emergency county with the approval of a resolution. Emery County is in the extreme drought classification and this would put the county in concordance with the state statue issued by Governor Spencer Cox on March 17, 2021.

Ratification was given for the change orders for Millfork and Meeting House Canyons on the Trail Mountain Fire Emergency Watershed Projects. This closes the contract with the Natural Resources Conservation Service.

Also during the meeting, another ratification was given for the Fund LTSA Technology Enhancement Contract that needed to be signed in March in order to qualify. These funds will help to buy routers for the libraries of Emery County.

In the elected officials reports, Commissioner Lynn Sitterud reviewed the history of the San Rafael Energy Research Center. At an earlier date, bids were received for contractor work but were not within budget. The bids were posted again and this time three bids were received and two were within budget. These bids will be scrutinized to see if they meet requirements and values. The hope is that work can begin within the next few weeks and a contractor will be at work shortly. 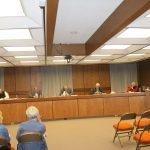 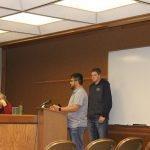