Ryan Piccolo (left) and Cindy Lund (right) teamed up to organize the festival.

By Andrew Hislop
Tight on the heels of the Sundance Film Festival came the Third Annual Butch Cassidy Film Festival in Helper.
The festival opened last Monday, the day after Sundance closed, with “Adventures of Power.” Premiering at Sundance in 2008, the movie was filmed largely in Helper. After his union leader father starts a strike at the coal-fired power plant, Power is discovered at an air drumming competition in Mexico. Sent to Newark to train with “The Jersey Krew,” Power defeats real drummer Dallas Houston and falls in love with a deaf girl who works in a Chinese restaurant.
“Believing in one’s self and overcoming obstacles is what the movie’s really about,” said director and lead actor Ari Gold. “Helper is one of the stars of the movie; it just looks amazing.”

Tuesday featured documentaries by locals or about locals. First up was “Monumental Memories,” a travelogue directed by a young girl and featuring her family at various locales in Utah and the Albuquerque Balloon Festival. Next were encores of “Long Drives & Bidding Wars” and “How to Save a Life,” two films originally screened at the previous film festival. “Muledalgo,” an hour long movie entered in competition, ended the evening. It chronicles local Jake Hardy’s solo mule trip across The Swell. Starting in Goblin Valley and ending in Wellington, the film stars Jake’s mule Johnny Ringo and his dog Faye Larkin in an eight-day adventure.

“This was a piece of his soul, a spirit-type quest,” said his father, Leo Hardy, after the screening. “His production, his photography, his music, his mind.”

Day three featured dramatic shorts embracing the themes of life, death, heaven and hell. “Timber,” “Oasis” and “Gather” were all entered in the competition.

“Tonight is my favorite night of the festival,” said film festival co-director Cindy Lund on day three. “The theme of the festival is stories of the American West. Butch Cassidy is just one story, what’s yours?”
After an encore presentation of “Thorn, Thank You for Coming,” there was a special screening of “Toss of the Coin.” It features Helper actor Morgan Lund as a demon who loses a coin toss to an angel over who takes possession of a dead body electrocuted by Sprat the Cat.
“A sense of humor helps a lot when you’re an actor,” said Lund after the short film.
Thursday showcased more documentaries of the American West. “The Lan,” “”In the Year of The Dog” and “Del Burke,” a film about a madam in a brothel in Lusk, Wyo., were all entered into the competition.
On Friday was horror night. “Don’t bring your children,” advised Cindy Lund.
All three films, including shorts “Sawtooth” and “Stone Hollow” along with dramatic feature “Elsewhere,” were entered in competition.
At the conclusion of the festival, “Muledalgo” won the prize for best documentary and “Sawtooth” won best drama.
A special thanks is extended to co-directors Cindy Lund and Ryan Piccolo as well as all those who helped make the Third Annual Butch Cassidy Film Festival a success. 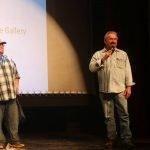 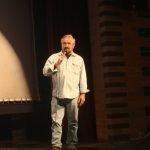 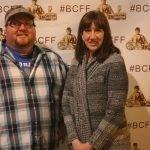