Emery Spartan big man Koby Butler and point guard Bowdie Jacobson were named to the 2A All-State Team on Tuesday evening. Carbon center Kyle Quinton was named to the 3A Third Team.

Emery’s Kolton Butler found himself on the 2A Honorable Mention team.

Koby Butler, the most dominant center in 2A, led all of 2A (12th overall statewide) in points and rebounds, averaging 19.3 points per game and 12.4 rebounds per game (led the state in rebounds). He posted double doubles in 22 of Emery’s 25 games. Butler scored a career-high 33 points and pulled down 15 rebounds against Gunnison on Feb. 1. He also scored 26 points and pulled down a career-high 19 rebounds against Union on Dec. 21, 2016. Butler was a first team all-state honoree a season ago.

Also a first teamer from a year ago, Jacobson was named to the team again this year after averaging 12.3 ppg, 5.9 apg and 2.6 rpg. He poured in a much-needed 24 points and dished out seven assists in the Spartans’ 80-68 win over the Grand Red Devils on Feb. 10, which helped clinch the Region 15 title.

Kolton Butler was fourth on the team in scoring, averaging 9 ppg, second in rebounds with 7.6 per game and second in assists with 2.9 per game. He nearly posted a triple double against Union on Dec. 21, 2016, scoring nine points, pulling down 13 rebounds and dishing out 11 assists. He also notched a 14-10-7 game at North Sanpete on Dec. 16, 2016.

Quinton was the lone honoree from the Carbon Dinos, notching a place on the 3A Third Team. Quinton, arguably the second-best big man statistically in 3A, averaged 16.1 ppg to go along with 8 rpg. He scored 17 points or more in 13 of Carbon’s 25 games, including a career-high 29 points in a 68-54 win over then unbeaten Emery on Jan. 7. 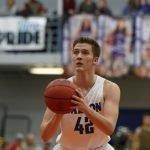 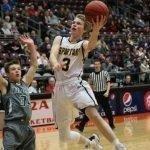 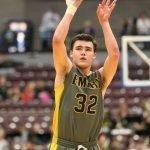