On Feb. 22 around 10:50 p.m., Officer Chris Gigliotti with the Helper City Police Department noticed a suspicious vehicle in the North Martin area of Helper City. As officer Giglotti pulled up to investigate this vehicle, the driver suddenly took off. Officer Giglotti initiated a pursuit and followed this vehicle as it traveled northbound on Highway 191. Around the Emma Park area, the suspect turned around and traveled back towards Helper City. Officers with the Carbon County Sheriff’s Office and the Utah Highway Patrol quickly responded to assist Giglotti. As the suspect vehicle approached the Carbon Power Plant, the driver lost control of his vehicle and went airborne, crashing into a ravine where he was quickly apprehended.

The suspect was identified as 36 year old Lance Justet from Salem, Utah. He was wanted in Utah County for several outstanding warrants. Justet was booked into the Carbon County Jail for several violations including fleeing/eluding, reckless driving, ignition interlock violation and driving on suspension.

Thankfully, nobody was injured during this event. 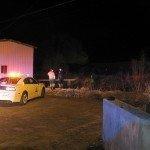