Twenty-nine Carbon and 13 Emery wrestlers competed at the 1A, 2A, 3A, Junior High/Middle School State Tournament on Friday and Saturday in Richfield at the Sevier Valley Center. Thirty teams participated.

The Emery junior high division was represented by Bryar Meccariello (third) and  Dwain Farley (fourth), as well as Drake Weber and Braiden Ivie, who both took sixth. Ivie suffered an injury and had to forfeit his last two matches. 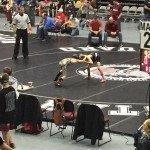 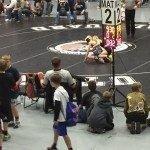