The Dino cross country team competed in the UIAAA Invitational on Friday in Spanish Fork.

Carbon competed well against the likes of Copper Hills, Woods Cross and Spanish Fork. Orem, a top 10 team in state, took the meet.

Grace Broadbear led the Lady Dinos in 25th with a time of 20:41. Carlee Hansen from Woods Cross won the event finishing just a tick under 19 minutes. Carbon’s Ambree Jones ended in 44th at 21:42.

Head coach Telisse Martak was proud of her group. “They ran awesome,” she said. “We will be in North Sanpete on Wednesday in the showdown of all showdowns.” Every school that is expecting to compete for the state title in 3A will be at the meet on Wednesday, except for Morgan. Martak concluded, “It will give us coaches an idea of where we are at.” 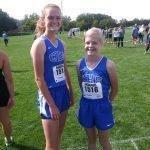