This item was requested to be put on agenda by Helper City Fire Chief Matthew Montoya, who stated that the ambulance department is highly trained, professional and courteous. He remarked that sometimes they have to get creative to be successful and wanted to personally thank them for a job well done in many instances.

Price City Fire Chief Fitzgerald Petersen said the relationships between the city and county are working very well, which makes his job much easier. Commission Chair Casey Hopes stated that the ambulance department is one of his responsibilities as a commissioner and he appreciates everything that they do.

“They have a tough job and they handle it very professionally,” Commissioner Hopes said. He also remarked that he appreciates all that they accomplish on duty.

Commissioner Tony Martines stated that he has seen them in action as they continuously serve, day or night. He agreed that the job is a challenging one and extended his appreciation to those who selflessly serve. 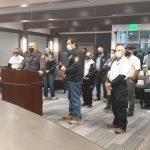 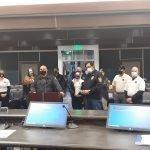