On Thursday, it was announced that the Carbon County Ambulance will be playing host to a drive-thru trick-or-treat event.

This event is slated to take place on Halloween day from 2 p.m. to 4 p.m. at the ambulance station. It was explained that the event is being conducted as a sort of reverse parade, with the community driving through and the participating departments or agencies standing on the side-line, passing out treats to the children.

“We believe that this will provide positive promotion for our local entities, as well as a fun event in light of the pandemic. We have received approval from Southeastern Utah Health Department to proceed,” said Christine Johnson of the ambulance department.

With the approval, the department is requiring that those that pass out the candy and various treats don masks and gloves. Johnson stated that participants may wear their own mask or one that will be provided. Gloves will also be provided at the event and Johnson stated that dress and attire is up to the individual.

A single vehicle representing as department or agency participating is requested and the treats will be passed out in front of that vehicle. Those with larger vehicles will be placed in a larger area to accommodate the size. Vehicle emergency lights may be used, though no sirens will be permitted. Those that wish to participate may contact Johnson through email at christine.johnson6996@gmail.com. 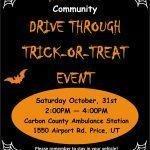 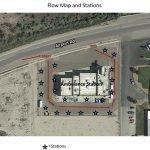