During the last Carbon County Commission meeting of 2021, time was taken to honor John Schindler, who will be retiring from the county attorney’s office. Attorney Christian Bryner began by stating that Schindler began working for the county, part time, in 1985.

Schindler then switched to full-time work in 2000. He has given 36 years of service to Carbon County and, in that time, he must have prosecuted tens of thousands of cases, conducting dozens of trials in both the justice and district courts. Just this year, he contained a conviction on a difficult manslaughter case.

Bryner explained that every trial has a twist and there is always something tricky about them, making each trial an adventure, something that Schindler is always up for. He has also represented several local cities for many years. Bryner said that what impresses him most about Schindler is that he is a fountain of wisdom and knowledge, making him more than just a competent lawyer, but a brilliant one.

Schindler can cut through to the heart to see what matters and has to be focused on, it was shared. He has been a mentor to Bryner, who stated that his guidance and experience on how to get things done has been invaluable to him.

“It’s been a great pleasure and a great privilege for me to work with John,” said Bryner.

He then stated that residents should know that Schindler has cared about his work and takes it very seriously to do everything that he can. Bryner stated that the attorney’s office is going to miss him tremendously and he has been a friend to all.

Schindler then spoke, stating that for the majority of his career, he has been very lucky to be part of a good team. He thanked everybody there, particularly the people he works with.

“I’m leaving you in good hands; you’re getting people who are giving you 150% all the time,” Schindler shared. 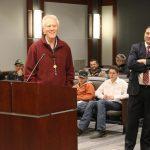 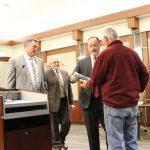 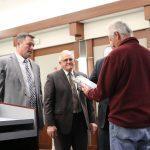 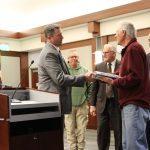 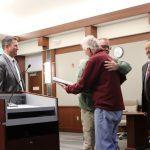