A plethora of recognitions were given during the Oct. 20 Carbon County Commission meeting, culminating in the recognition of retirement for Lynette Eaquinta with the attorney’s office.

Beginning this presentation, Carbon County Human Resources Director Rose Barnes said that when she first began working with the county, Eaquinta was in the office next to her and they became great friends.

“If we had every employee like Lynette, you wouldn’t need me,” said Barnes.

Eaquinta postponed her retirement in order to help out in the office and Barnes credited her as being very quiet, but always going above and beyond. Barnes said Eaquinta is one of the nicest people that she has ever known before Eaquinta’s supervisors took time to speak on her qualities.

It was stated that if anyone needed a secretary, she is the kind of person needed as she does more than just her job, going out of her way to find things to make her supervisors look even better. Eaquinta was also praised for being kind to everybody, even those that might not deserve or earn it.

“I thank the county for giving me this opportunity to be their employee,” she shared.

She then thanked the commissioners, past and present, for making her feel like a valued person, stating that they made her feel like she mattered. Eaquinta said they have given her confidence in herself and that she has grown immensely from the day that she started the job. 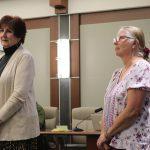 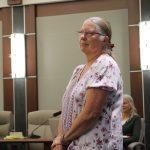 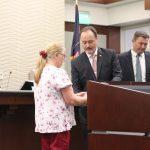 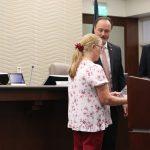 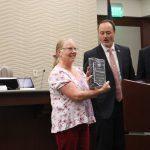