The Carbon County Chamber of Commerce conducted its Installation and Awards Banquet on Jan. 16 at the Carbon Country Club. The event celebrated local business and welcomed 2014 board members.

Mike Mower, Deputy Chief of Staff to Utah Governor Gary R. Herbert, was the keynote speaker at the banquet. Mower is originally from Ferron and expressed the importance of Carbon County to Utah and the country as a whole. He spoke of the governor’s respect and love for the area.

“The community knows how to work together,” Mower stated. The unemployment rate in Carbon County was down to six percent in 2013 and the deputy chief of staff explained that the governor’s office feels that the community is doing well.

Work is underway on a facility that will produce liquid extracted from coal. The governor’s office is also looking at the viability of a nuclear power plant in Green River.

Mower explained that efforts continue to market tourism in Utah. He feels that the phrase “Life Elevated” is a term that needs to be associated with the entire state, not just the ski resorts. Travel destinations throughout Utah will be highlighted through this campaign and will include Carbon and Emery counties.

Recently, USU Eastern was ranked third in the nation in graduation success. According to Mower, the school is a valuable asset to the community and is a wonderful college.

“It takes people to make a community a success,” Mower indicated. “Thank you to everyone who makes Carbon County wonderful.”

Awards were handed out during the banquet to business owners and chamber members for their contributions to the community during 2013.

David Funk from Parkdale Health and Rehab was awarded the Board Member of the Year Award while the President’s Choice Award went to Kerry Jensen of ServiceMaster Restoration.

The Contribution to the Community Award went to Kathy Hanna-Smith who serves on the Price City Council and who is a board member for the Utah Office of Tourism.

Shelley Murphy from JC Penney and Jake Mellor from Tatton and Mellor Insurance each received Outstanding Chamber Member of the Year honors.

Certificates of Appreciation were handed out to local media outlets for their service during 2013. ETV 10 News, Castle Country Radio, AJB Broadcasting and Sun Advocate were all recognized for their work in keeping the public informed of upcoming community events and happenings.

Outgoing chamber of commerce members were also honored during the banquet. Service awards were handed out to Nicole Steele, Erroll Holt, Ethan Migliori and Scott Olsen. 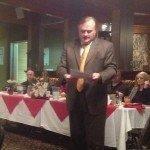 Mike Mower addresses the audience at the Carbon County Chamber of Commerce Installation and Awards Banquet. 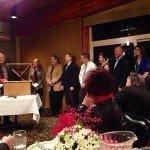 Members of the 2014 chamber of commerce board are sworn in by Price City Mayor Joe Piccolo. 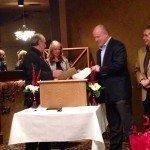 Awards were handed out to business owners during the event.