Awards and recognition abounded during the Carbon County Chamber of Commerce’s annual installation and awards banquet on Thursday evening. Members of the community gathered to recognize outstanding businesses and community leaders throughout the evening.

The first award presented during the banquet was the Best Small Business Award, which was given to Eastern Utah Broadcasting, which began in 1936. Since that time, it has become the longest running, family-owned radio station in the state. Throughout the years, Eastern Utah Broadcasting has aimed to be a community-involved station. Each year, the business raises funds for the Kiwanis Club of Price, totaling hundreds of thousands of dollars raised in 53 years. Eastern Utah Broadcasting is also known for its annual pie auction, which benefits local cancer patients, as well as its $2,500 college scholarship. The business employs 10 people and is planning an expansion in 2020.

Next, the Best Large Business Award was graciously accepted by Castleview Hospital. Known as one of the largest employers in the county, Castleview Hospital employs 400 people. The vision of the hospital is to create an environment where people choose to come for healthcare, physicians want to practice and employees want to work. On top of that, Castleview Hospital is known for its community involvement. Each year, the hospital donates thousands of dollars to city celebrations, local youth, non-profit organizations and much more. Castleview also hosts its own community events, including free, informational events as well as kids’ activities, fundraisers for those in need and much more.

The Community Service Award was then presented to Price City’s Culture Connection, a series that began many years ago when dedicated local residents decided to create a forum for musicians to perform in public. It survived for several years but when Culture Connection’s future was in question, Price City and community leaders recognized its need and potential. Community leaders stepped forward and took it under their wings in an effort to not only save it, but to place it on a trajectory to be a great benefit for the community. Kathy Hanna-Smith and Neil Breinholt accepted the challenge and converted the concert series into a centerpiece of Price City’s cultural best. The legacy of Culture Connection continues and thrives under the management of the council and employees of Price City.

Barbie Haeck then received recognition as the Carbon County Chamber of Commerce’s Outstanding Board Member of the Year. Since 2018, Haeck has served as a board member for the chamber. She has assisted with by-law changes and has helped lead chamber board meetings and chaired the marketing committee for two years. She also helped plan the chamber’s casino night fundraiser, which was one of the biggest fundraisers the chamber has hosted in recent history. Haeck is a big supporter of chamber events as she attends banquets, trainings, meetings, ribbon cuttings and more. Haeck will serve as the chamber’s president in 2020.

The final award of the evening was presented to Amanda McIntosh, the Suicide Prevention Specialist at the Southeast Utah Health Department. McIntosh was given the President’s Choice Award by the chamber’s 2019 president, Colleen Loveless. McIntosh’s husband ended his life 2014, prompting her to commit her free time to the HOPE Squad of Carbon, Emery and Grand Counties in an effort to spread education and awareness around suicide prevention. She then shifted her professional career to also include these efforts as she accepted her role at the health department. Since then, she has given hundreds of community members life-saving information, hosted support groups, immersed herself in the HOPE Squad and much more. McIntosh accepted the award along with her daughter Abbigale, who she credited with being her inspiration.

Recognition was also given to Ann Anderson and Loveless for their years of service to the chamber. They were both presented with gifts for their hard work and dedication. The aforementioned awards were created and donated by Danny Blanton of Original Creations while the gifts given later in the evening were from Peczuh Printing.

Following the presentation of the awards, the 2020 Carbon County Chamber of Commerce Board Members took an oath, swearing their dedication to the chamber. For 2020, Haeck will serve at the president and Max Jones will serve as the vice president. Jamill Tapia will fill the role of the secretary while Tim Frame will serve as the treasurer. Richard Tatton will serve as the past president due to Loveless leaving in February for a mission. Other board members include Amanda Paiz, Darin Birch, Ryan Pugh, Taren Powell, Rene Clark, Michael Bryant, Kerrie Barker and Austin Preston.

The banquet also served as a celebration of the chamber’s 85 years of service to businesses in Carbon County. Funds raised from the event will directly benefit the Trinity Christian Center’s community outreach, specifically the organization’s food pantry and clothing closet. 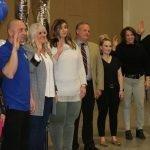 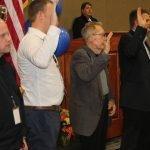 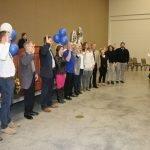 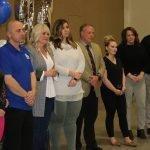 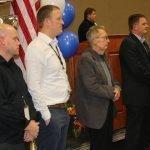 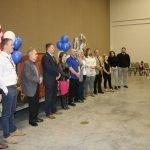 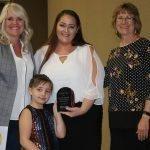 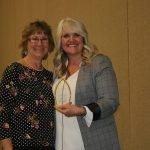 Outstanding Board Members of the Year – Barbie Haeck 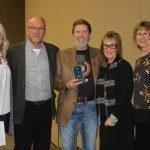 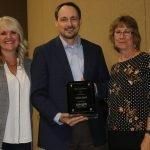 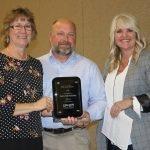 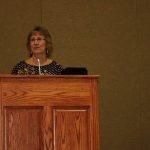 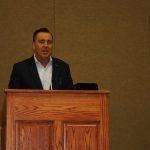 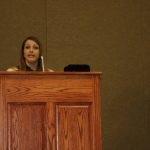 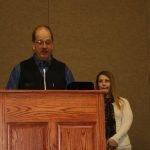