The second addition of the Castle Country Radio Meet the Candidate night was hosted in the Alumni Room at the USU Eastern Jennifer Leavitt Student Center on Tuesday. In the spotlight this time around were Carbon County clerk/auditor hopefuls Seth Marsing and Sulika Laulu Merrell as well as Utah House District 69 Representative Christine Watkins and competitor Tim Glen.

Merrell and Marsing took to the hot seats first, starting out the night by introducing themselves. Marsing stated that he was born and raised in Carbon County and trained with former clerk/auditor Seth Oveson prior to his retirement. Merrell explained that she has worked for the county for the past 15 years, nine of those years having been spent in the clerk/auditor office.

The question portion of the evening was then kicked off by Merrell, who was asked “With the financial crisis entering the third year, what would you do differently?” She answered by stating that she would go over everything with a fine-tooth comb and has already began, visiting back as far as 2012. Marsing’s question was “What would you do differently from previous years?” to which he answered that he would ensure that the county is not spending over revenue and department heads have accurate budget information.

Similar questions followed suit, with pressing community issues at the forefront. One particular question, “Does the county need to do more staff reductions to get the budget in line?” was answered in both the affirmative and negative. Merrell believes that, while it is a hard question, she would like to see the county step in another direction and not lose more key players to cut the budget. Marsing’s beliefs were that the county could lay off more if necessary and a last resort; however, that the last resort should be raising taxes.

The candidates were also asked whether they were in favor of the new 7th District Courthouse, which the two were in agreement. Both answered yes and each explained why. Merrell stated that it is something that is needed in conjunction with the local law enforcement and the like. Marsing explained that the misconception of expenses is a big issue and that the courthouse is paid for through the state. Furthermore, he stated that he believes the building and what it entails is good for the county.

The clerk/auditor candidate’s portion of the evening drew to a close with Merrell expressing her gratitude to the sponsors, including Castleview Hospital, as well as the challenging questions. Marsing’s closing statement included his confidence in his background and education to assist in ensuring the clerk/auditor’s office runs smoothly and, as a result, the county.

The next Meet the Candidate’s night will be hosted on Oct. 16 at the student center once more and will feature Carbon County Commissioner hopefuls Ed Chavez, Larry Jensen and Cheryl Lupo. Questions can be submitted to election2018@koal.net. 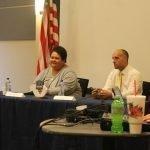 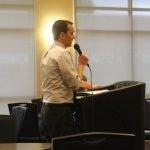 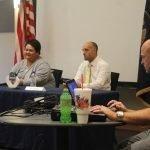