Jensen, a native of the county, has lived here for the entirety of his life and raised his family here. He expressed his appreciation to be in the running for a commissioner seat.

“This community; my roots are deep and I have a great love for it,” Jensen stated.

Chavez touched on his history in the county, stating that in 1975, he started his career with Helper City, eventually moving onto law enforcement. After 30 years, he retired from law enforcement and notched over ten on the Wellington City Council and four years, nine months as the Helper City Mayor as well as other city positions into his belt.

Lupo introduced herself last, stating that she has no party affiliations, but does hold issues closely to her heart. Two issues of great importance to Lupo are bringing businesses to the county and keeping her eye on the financials. Lupo has ran her own businesses over the years and worked on the local economic development board as well as the subcommittee for beautification.

The question portion of the night, submitted by the community, then began. The first question, “What is the first item of business that you would take care of if elected?”, was first answered by Chavez, who stated that he would call a meeting with all the department heads and make them aware that each will be held accountable for what their departments are doing. Chavez continued by stating that he would then travel to Salt Lake City and try to speak with the economic developer.

Starting by calling businesses into Carbon County was Lupo’s reply, who explained that she has contacted at least 11 to 12 businesses located in California and overseas as well as AutoZone and CVS for distribution opportunities, among other options. Jensen stated that he would get to know the staff and employees of the county, find their concerns and work toward helping them.

Another question submitted was “What have you recently done to prepare yourself to be competent and valuable as a commissioner?” to which Jensen replied that his biggest advantage gained is studying the financial situation from past years to present. Jensen has looked back as far as 2008 into the budget and believes he is gaining a decent handle on the income.

For Chavez, he believes visiting other departments and finding out what they have and could do without for a year or two not to overspend on the budget has given him a leg up. To Lupo, communication with the citizens of the county is key, as well as her previous job experience. Many questions regarding the budget, financial crisis and courthouse followed.

Discussion on past hardships of economic development, the hopeful’s plans for community involvement and the support or opposition of proposition 2 took place. After two hours of community-submitted questions, the night wound down to a close with a farewell from the hopefuls.

Next week is the final segment for Meet the Candidates and will feature Carbon County Commissioner/Surveyor hopefuls Melvin Coonrod, John Jones and Tony Martines. Once again, the event will take place at USU Eastern beginning at 5 p.m. and questions may be submitted to election2018@koal.net. 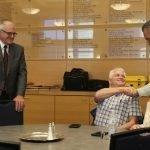 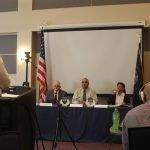 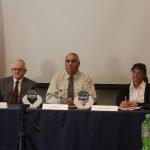 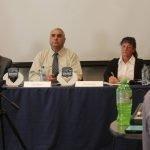 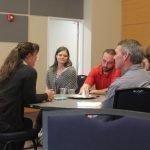 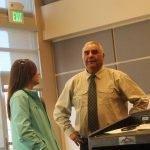