This award, the Trust Accountability Program (TAP) Award, has been earned by Carbon County for four consecutive years. The TAP was established as a way to ensure that cities and counties are implementing the best risk management and safety procedures for their particular area.

Foulson stated that each year, the benefits are progressive and grow. At this point, having received the award for four years, they are fairly significant. The county received a check for nearly $4,000 and a discount to workers compensation of about $9,000.

According to Foulson, the best practices that have been employed revolve around the use of the safety committee. He expressed his appreciation to Carbon County for all of its efforts, particularly Don Johnston and Rose Barnes.

“I also want to be sure and thank you, the commissioners,” Foulson continued.

He concluded by stating that the county cannot have effective, needed programs without the commissioners and appreciate, as well as recognize, their efforts. He then presented the commissioners with a plaque to commemorate the honor. 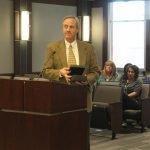 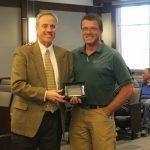