On Dec.12, 2014, Carbon County Sheriff’s Deputy Shawn Addley was simply performing his regular duties on a routine patrol when his instincts kicked in and proved himself a hero.

Addley noticed a car parked on the side of the road with a driver who appeared to be sleeping. Since it was only mid-afternoon, Addley deemed the situation suspicious. He parked near the vehicle and began observing.

When Addley realized the car was registered to an address near its current location, he decided it was time to take action. He approached the car and found a man and a young boy asleep with the car running and the windows and sunroof slightly opened.

Addley was able to wake the man and his young passenger and call emergency services. According to reports, the carbon monoxide levels could have been deadly if action had not been taken when it was.

The sheriff’s department awarded a Merit of Honor to Addley for his heroic act during at a recent staff meeting. The family of the young boy attended the ceremony and expressed their gratitude for Addley’s quick thinking and courage.

According to Sheriff Jeff Wood, the incident happened between the election and his inauguration, which is why the honor was delayed. Their regular staff meeting Thursday was the only time every department would meet together and Sheriff Wood thought it would be the best time to honor Deputy Addley for his lifesaving act. 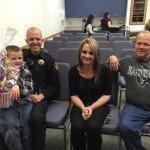 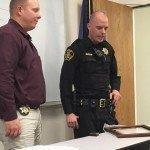