Community Emergency Response Team (CERT) Coordinator Amy Jones was recently approached and asked to lead a community neighborhood watch for Carbon County. The first meeting took place on Thursday evening with a modest and hopeful turnout of around ten residents.

The main goal for the inaugural meeting was to spread the word of neighborhood watch. Many people have stepped forward with the idea of the watch and Jones, along with others, would like to encourage those that believe they can be members of the watch to step forward and engage.

The group is open to new ideas and information and would like those to be brought to the next meeting. This meeting will take place on March 9 at 7 p.m. To attend, simply arrive at the Events Center at the Carbon County Fairgrounds at the scheduled time. It is anticipated that these meetings will occur on the third Thursday of every month.

“This is a program that I think is worthwhile,” Needles stated. 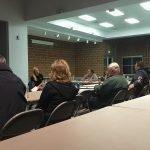