On the evening of June 14, the sheriff’s office was contacted and advised of a missing nine-year-old female in the Emma Park area. The young child was on a family outing when she lost her way back to the family’s gathering area. After an extended period of time searching for the missing child, the family contacted dispatch and advised them of the situation. The location was between both Utah and Carbon County areas.

Sheriff Jeff Wood, deputy William Marinoni and emergency services director Jason Llewelyn headed to the scene to assist. During their response, Utah County Search and Rescue as well as our own search and rescue was in the process of being mobilized. Usually, a nine-year old child lost in the mountains, darkness setting in rapidly, a flowing river and a rainstorm has the makings of a not so great ending. This was not one of those cases. Two oil field workers saw the young child and picked her up. Medical arrived and found her cold and wet from crossing the river. She was warmed up and treated by the Carbon County Ambulance personnel and released to her family by 9:45.

Even though they were never fully mobilized for this missing child incident, I felt that the citizens of Carbon County should know how fortunate they are to have their own search and rescue.

All members are trained and experienced in the operation of snowmobiles, ATVs, UTVs and watercraft. The team trains and meets on a regular basis throughout the year. During 2015, the Carbon County Search and Rescue team has been activated on several occasions in Carbon County as well as surrounding counties.

Due to being a non-funded department, our search and rescue team receives a majority of their yearly funds from the proceeds generated at our Demolition Derby which will be held on June 27, 2015, at the Carbon County Fairgrounds. Gates will open at 4 p.m. and the derby will start at 6 p.m. Advanced ticket sales are now being sold at Market Express, Tire King, Swifts in Helper, Chug A Lug and Single Stop in Wellington. Advanced ticket prices are $8 for ages 13 and older, $6 for ages 6-12 and children five and under are free. If you are interested in putting a vehicle in the Demolition Derby, the entry fee is $75.00. Entry blanks and rules can be picked up at Tire King at 535 East Main Street in Price or by calling (435) 637-8473.

Have a safe week and we hope to see you at the Demolition Derby. 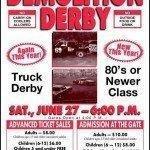