Fifteen years ago, Ride on Utah, Big Ride was founded. Fred Hayes, Bill Thompson and the Bushman Brothers are credited with forming the ride. The Utah State Parks OHV Program became involved and they had a vision of what the event could become.

Because this ride was a fresh idea, the first event was attended by many others from across the state. It was stated that there was an influx of attendees in that inaugural year and they had to be split into two different group rides that met up in the same place in the end.

Hayes, the OHV Coordinator of the time, had the vision of traveling from one town to another on an ATV. Over time, the program was viewed as such a success that travel from town to town from one end of the state to the other is now accomplishable. Because of the opportunity to be street legal, the adventure is now even more possible.

Former Wellington City Mayor Joan Powell has served on the Big Ride Committee for the past four years. She stated that the event always begins with months of planning and preparation, with the goal being to gather different counties of the state each year.

“Sometimes the planned rides will take the attendees into several counties throughout a three to four day adventure. It’s much more fun to host meetings in the great outdoors, rather than in offices, or in this year’s case, virtual. There ended up being 19 attendees with machines varying from motorcycles, to ATV’s, up to four-seater OHV’s,” Powell stated.

Utah State Off Highway Vehicle Program Coordinator Chris Haller is generally the one that gets the ball rolling on the event, pulling a committee together and formulating the plan. Generally, there are six individuals that form the committee. For 2020, the members were Haller, Powell, Ty Tyler, Steven Hawkins, Wayne Pahl and Arnie Cooper, all Utah residents.

In 2019, Wellington City applied for $12,500 from the Fiscal Incentive Grant Funds from Utah State Parks with the intention of utilizing the funds to build the Wellington City OHV Trails.

The money comes from the registration fees that the state collects as an individual registers their OHVs. The city received grant funds and has since then commenced the work on the trail, beginning earlier in the summer of this year.

Powell hoped for it to be completed for this year’s event, as Wellington and Carbon County were requested to host the ride. However, Powell stated that due to unforeseen issues, the trail is not yet finished.

“A lot of work has been done from some of the most wonderful volunteers, but probably won’t see a finish date until spring 2021,” Powell said.

Though the trail was not yet ready, many local businesses came together to assist in the ride. The National 9 Motel gave great room rates while the Outlaw Cafe and the Cowboy Kitchen both assisted in making sure that all that visited the area and participated in the ride were well-fed and had an area to feature nighttime speakers.

For the first day of the event, Steven Hawkins, President of the Utah ATV Association, as well as Spencer Gilbert and Benjamin Burr from the Blue Ribbon Coalition, were joined by Carbon County Office of Tourism Director Tina Henrie to speak at varying times during the ride. Henrie also joined the attendees on the ride, which spanned over Potter’s Pond, Skyline Drive, Ephraim Canyon Road and more.

“The second day, the group went out to the Buckmaster Area, where they were treated to a historical presentation by Wade Allinson from Ferron. Scott Wheeler, as well as Jim Jennings from the Emery County Public Lands Council, assisted Wade. Much was learned about the history of the area, and it boasts a number of great trails to ride,” said Powell.

The last day of the event had the groups traveling through Daddy’s Canyon for the Great Hung Panel, up Frank’s Canyon and ending up in the Badlands area. For the final day, the ride guides were Powell, Brett Stewart and Cooper. Stewart also acted as the lunchtime speaker, sharing history on the Badlands Trail System. Senator David Hinkins joined the group for the ride on this last day, speaking at the Cowboy Kitchen.

“The best comment one can hear from the event is ‘I’ll go home and tell our club about this and we’ll be back.’ Next year’s event is to be held in Garfield County, and one might mention it is the 50th year anniversary for the Off Highway Vehicle Program at Utah State Parks and Recreation. Watch for some fun events that you can attend or be a part of. There should be something fun happening every quarter next year,” Powell concluded. 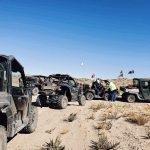 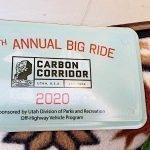 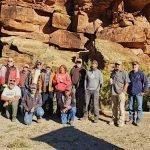 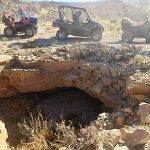