Seven Carbon High students traveled to the state level competition of Pro-Start on the March 7. These students were split into two separate teams that played to their strengths and worked together to represent Carbon High.

The students competed in the culinary branch of the competition and the management section. The culinary team has five members. Four of the members cook, one of whom is the team captain, as well as the team manager. They are given one hour to produce two servings of a three-course meal: the starter, entree and dessert.

The team members are in charge of developing the menu, figuring out a timeline and practicing as much as possible beforehand. The team manager is a key element that is responsible for keeping everyone on track, reminding them of time, tasting and more.

The majority of scoring can be subjective due to it being based on taste and appearance. However, Pro-Start teacher Daphne Stockdale said that the Pro-Start team was very impressed with this year’s culinary judging. The culinary team this year consisted of students Hannah Powell, the team captain, Shaubre Stockdale, Glen Reed, Thayna Mendoza and team manager Crystal Nef. This year’s menu had a southwestern flair with items such as a roasted corn and avocado gazpacho with mango salsa.

The management team developed a restaurant concept. The team, consisting of students Canden Stockdale, team captain, Hannah Powell and Brenna Bodgin, created a written proposal. This proposal consists of the restaurant description, a floor-plan and restaurant space scenario, description of the interior and decor and more. The majority of the team’s points come from critical thinking and marketing. They must be able to answer questions about possible situation that could occur and must be creative in their marketing approach.

The culinary team placed in seventh and the management team took fifth place. 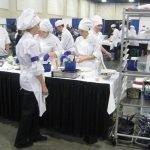 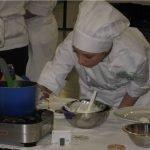 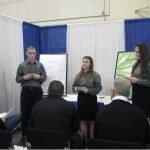