On Wednesday, Carbon and Emery met up with some 75 other teams at the State Preview in Salt Lake City. Runners had the chance to get a look at the new state course and compete in races consisting of several hundred people. While that created a lot of runners to maneuver around, both the Dinos and Spartans performed well on the day.

Unique to this race was that contestants ran based on their age, rather than skill level. The boys’ and girls’ races were divided into freshman/sophomores and juniors/seniors.

Lindsie Fausett (CHS) had the best time of the locals in the girls’ junior/senior race when she took 18th. Ambree Jones (CHS) came in 34th with teammates Sophie Taylor in 44th, Beverly Lancaster in 48th and Ada Bradford in 54th. Kallee Cook was the first Spartan to cross when she came in 50th.

“The team loves the new course. We ran some great times with lots of new season and personal bests,” stated Carbon head coach Telisse Martak. Martak was also impressed by the Lady Dinos’ minute spread and the boys’ sub-minute thirty spread. “It was a great day for Carbon XC,” concluded Martak.

Full results for all four races can be found here. 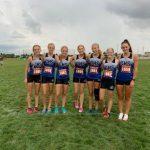 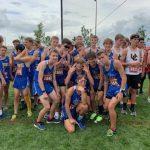 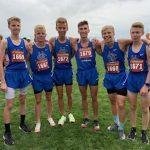 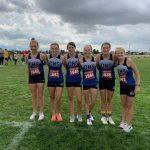 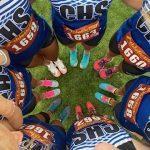