The Utah State Future Farmers of America (FFA) Association Convention gives participants the opportunity to attend leadership seminars, learn from the success of other chapters and compete in various events.

According to Carbon High FFA Advisor Jacie Pressett, her team was comprised of many competitors that worked very hard. “The chapter entered several categories that we have never competed in before,” Pressett explained. “Teamwork and dedication were essential to our success.”

Maya Anderson was selected by the Utah Beef Council to serve as a Beef Ambassador. She will serve the council and promote beef at six events. She earned a $500 scholarship and travel funds.

Vince Edwards was the recipient of the Deep in the Heart Scholarship, which is worth $400. He was nominated by Pressett and selected as an outstanding member among many other applicants.

Several students participated in the state agri-science fair conducted at the convention as well. Kyler Wood presented a project on the basic and acidic properties of soil and the affects of coal dust on plants growing in Carbon County.

After losing and gaining several partners while working on the project, Wood and Shianne Cooper placed third in the extremely competitive category. 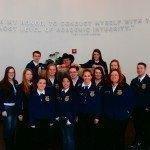 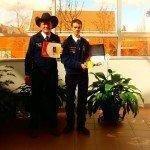