The Carbon High cross country team is off to a great start this season. The team competed Friday in Monticello against ten teams from Utah and Colorado.

The boy’s team was led by junior Trey Richardson who ran in 18:21, while Drew Jones was the second Carbon finisher for the boys with a time of 18:49. Logan Engar, Paul Bryner, Kyle Quinton, JW Broadbear and Kaden Kranandonk rounded out the varsity squad.

The team competed earlier in the season at the Red Rock Invitational in Moab and at the American Fork Grass Relays, an individual event.

The teams will now travel to North Sanpete on Wednesday before competing at Brigham Young University Autumn Classic on Saturday. 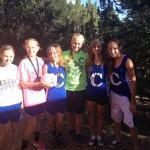