The Carbon High boys and girls cross country teams each claimed first place on Wednesday during their meet at Altamont. The meet included Uintah, Duchesne, Tabiona and Altamont.

The top four finishers of the girls’ race were all Dino runners. Emily Broadbear led the squad, finishing in first with a time of 19:29. Madi Black took second and Sarah Ohlwiler took third, each setting personal bests. Though still recovering from illness, Zarah Rossi managed to win fourth place. Nikki Kulow and Katie Snow also finished with personal bests. The girls finished with a score of 24.

The boys’ team was also successful in capturing finishes in the top five. The team was led by Paul Bryner, who finished in second overall with a personal best of 17:46. Trey Richardson finished in third with Drew Jones in fourth, and Logan Engar in fifth. Kyle Quinton, Kaden Kranendonk and J.W. Broadbear rounded out the boys’ squad to help the boys’ team finish with the score of 25.

Head coach Telisse Allen attributes the great success Carbon saw at the meet to having runners work on keeping up with and passing each other. “We focused on our ‘gap,’ which is what we say in reference to the amount of time between our number one runner and number five,” she said. “We focused on trying to keep that time as close as possible.”

The team effectively tightened their gap so much that the first four runners on both the boys’ and girls’ teams finished consecutively and in the top 10.

“In big races where there are hundreds of runners, having a tight gap is how you keep a low score to win,” Allen explained.

Carbon will host their next meet on Wednesday at the Carbon Country Club. The junior high event will begin at 3:30, followed by the boys at 4:00 and the girls at 4:30. 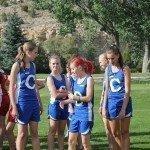