Carbon High School’s head track coach Jimmy Jewkes has spent his fair share of time on the track. From competing in high school to receiving several accolades during his college years, Jewkes has spent time both as a competitor and, more recently, as a head coach. That title, however, changed briefly as he and his family recently competed in the 2016 Utah Summer Games in Cedar City.

Jimmy, along with his wife, Heidi, and their two children Traxton and Jaxson, made the trip to Cedar City to compete in the track division in several events.

Nine-year old Traxton, the eldest of Jewkes’ children, was able to compete in several events and bring home various victories. Competing in the 9 to 10-year-old division, the young competitor scored first place in the high jump with a leap of three feet and seven inches as well as fourth in the long jump and fifth in the 100 meters.

Traxton also was able to compete in the javelin throw, learning how to throw in part from watching high schoolers compete with his father and mother, who also serves as one of the team’s assistant coaches. Competing with other athletes at least four years older than him, Traxton managed to throw the 600 gram javelin (the same weight used by high school women competitors) 54 feet and scored third place.

Jaxson, the couple’s seven-year old son, competed in the long jump in the eight and under division. The seven-year-old brought home a second place finish, nearly two inches behind the first-place jump.

Heidi, continuing to recover from lung surgery in October, competed in the 800 and 1500 meters. Her husband took the triple jump and was only five inches off from breaking the Utah Summer Games’ record. He also returned to take first and second in the long and high jump, respectively.

“Track in the Jewkes family,” Jimmy said, “it’s pretty much a family thing.” The father-coach enjoyed watching his sons cheer for each other as well as for cousins who had come to participate from southern Utah in the games.

“I think seeing my kids just excited to compete, you know having fun, made it worthwhile for me,” Jimmy further explained.

Besides the comradery of familial ties, Jimmy also has plans to return for another endeavor: breaking the triple jump record.

“It’s a doable record in my age group,” he asserted. 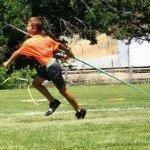 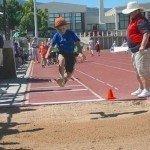 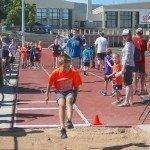 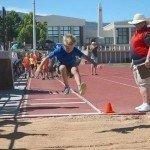 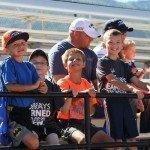 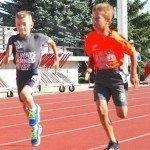 Traxton, age seven, competes with other young athletes from around the state. 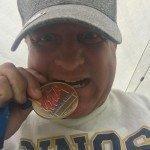 Jimmy poses with one of his medals 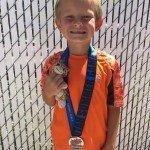 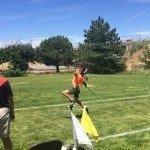 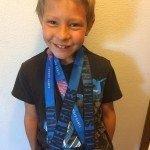