Carbon High’s vocal music department took home a lot of awards at state this year, according to Arthella Williams the Choir Director at the school.

“We had 64 students qualify for Region Solo and Ensemble competitions–more than any other school,” said Williams. “Of those 64 students, all received Superior ratings and Excellent Ratings.”

“Of those 18 vocal students who qualified for and competed at State, they all received superior and excellent ratings,” explained Williams.

“Nine of the 13 Sterling Scholars at Carbon High have been or are currently involved in CHS Choir,” said Williams. 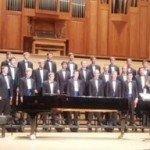