On Tuesday, March 8, Carbon High School (CHS) opened its doors to the Class of 2026. Current eighth graders from Helper and Mont Harmon middle schools filled Carbon’s auditorium as students were introduced to the school and their future classes.

Principal Jarad Hardy and the counseling team at CHS started the visit by welcoming the eighth graders and introducing them to the academic differences they would be encountering next year at the high school.

Counselor John Brooks informed the eighth graders of the requirements for graduation, including the number of credits. He spoke on “How to Succeed in High School,” emphasizing the importance of showing up and asking for help when needed.

In relation to asking for help, he described the school’s FLEX program. Brooks explained that FLEX is time given to every student at CHS to go to a class where they may be struggling, or even just missing assignments, to get help from that teacher. The FLEX time can be assigned by a teacher to any given student or it can be student-determined. Brooks showed the future Dinos what classes they will have to choose from next year and explained how they will register for those classes.

After Brook’s presentation, time was handed over to co-athletic director Amy Fox to fill the students in on the requirements for participation in CHS athletics, including GPA requirements and eligibility cutoffs.

After the initial presentation, eighth graders were assigned to a CHS Student Government leader who took them to have lunch. Following this, the students got to visit their ninth grade teachers and get an idea of what their classes and school days will look like in the fall. 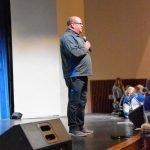 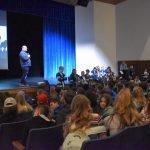 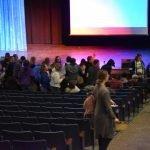 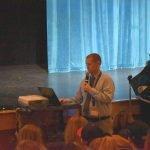 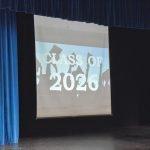 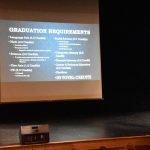