Nearly 20 schools got together in North Sanpete on Wednesday for a three-mile cross country meet. Porter Whitworth from Grantsville set the pace with a 15:40.7 time. Emery’s Bryar Meccariello and Jess Christiansen placed sixth and eighth with times of 16:29.2 and 16:40.2, respectively.

Kobe Cruz was the fourth Dino to cross the line. He did so with a time of 17:34.5 for 29th place. Shane Scaugard was under the weather but still put out a gutty performance to finish in 37th at 17:43.9. This allowed the Dinos’ spread to be under a minute once again.

Head coaches from both Carbon and Emery commented on the difficulty of the course. “The course is very challenging,” said Carbon coach Telisse Martak. “The first mile and a half is a steady incline with some little rolling ups and then downs.” Emery’s Kristy Guymon was proud of her group. “It was a hard course, but everyone ran really well.”

The top girl was Elizabeth Zwahlen from North Summit. She completed the course at 18:37.6, over 50 seconds faster than the next challenger. Emery took 12th place and Carbon did not place due to their lack of runners in the heat. (Several Lady Dinos were unable to make the trip due to prior obligations.)

“All in all, we ran well and put three in the top 15 (in the boys’ race). Ambree Jones ran a great, tough race,” Martak said. “We are going work on staying healthy and going into region and then state.”

Guymon is happy with the direction of her team. “All our hard work is starting to pay off. As a team, both the boys and girls are starting to group up better.”

These two teams will not race again until the regional competition, which will take place at Carbon on Tuesday, Oct. 15. 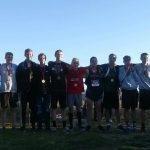 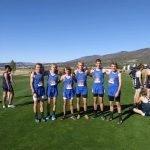 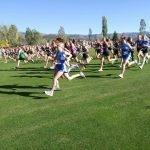 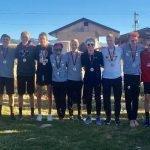