The Boys Cross Country team from Carbon High did something on Wednesday that had never been accomplished before in the history of the school, they became State Cross Country Champs.

Grantsville’s Porter Whitworth set the pace of the three-mile 3A race taking first with a time of 15:43. Chad Page from Carbon was the first Dino to cross in sixth place (16:25). James Bryner and Ryan Page also cracked the top 10, placing eighth (16:29) and ninth (16:30) respectively. Carbon was the only school to place multiple runners in the top 10.

The self proclaimed ‘Costco team’ grabbed points in bulk by finishing with a sub minute spread once more. Shane Scaugard and Kobe Cruz rounded out Carbon’s top five with times of 17:15 (22nd) and 17:19 (23rd). It is quite the accomplishment to have three runners make top 10 and have a team’s top 5 finish in the field’s top 22.

The Dinos obliterated the competition, finishing with a team score of 57. Richfield took second (90), Morgan third (107) and Emery fourth (115). Carbon’s head coach Telisse Martak could not hold back her excitement, “we won, we killed it! State Champs!” She continued, “[The boys’] hard work started with summer training clear back in June. They were dedicated and ran lots and lots of miles. They wanted it so bad!” The Dinos upgraded their first place region hardware with a State Title Trophy, the first ever in Carbon Cross Country. Congratulations to the State Champion Carbon Dinos! 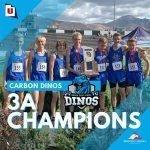 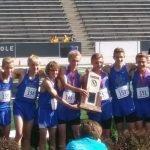 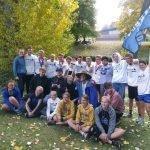