The course, which is 7.3 miles with 550 feet of climbing per lap, is the longest and most grueling course in the league’s history and not for the faint of heart. The course chewed up tires, caused flats, broke chains and even broke a rider’s seat post. Some riders finished by running across the finish line instead of riding.

Carbon’s two freshman, Hedin and Madrid, have been slowly moving up the rankings each race and finished in the middle of the pack at state. Despite this being their first year racing, they rode hard and performed well.

Coming back from season-ending surgery last year, Seeley of the JV-C group has really pushed himself all year. At state, Seeley also finished in the middle of the pack. He has already set some goals for next year, including finishing in the top 10.

The JV-B group is competitive. Going into state, Bradford was the Central Region champion and points leader. Facing off against the other three region champs can be intimidating, but Bradford was focused and got off to a strong start and pushed hard for two laps. After one lap, he only held a 15-second lead, but he didn’t let up, pushing harder and growing that lead to one minute by the time he crossed the finish line. Bradford became the second Carbon team member to take the JV-B State title as Olson took it last year.

Also in this tough group was Engar, Fausett, Emerson and Tullis. Tullis had two separate mechanical issues but overcame them and still finished the race. Emerson, despite having a difficult two weeks prior to the race, had a strong race and can be proud of all he’s accomplished this year. Engar and Fausett have been going back and forth all year, similar to last year, and both finished really great seasons with another impressive finish at state – 12th and 16th out of 96 racers.

If the JV-B group is competitive, then the JV-A group is ultra competitive. Out of 167 racers, Carbon fielded two riders, Barlow and Olson. Barlow has been the teams’ most unfortunate rider, often having bike issues each race, but he continued to be positive and attack the trail the only way he knows how. Borrowing a bike for this race, because he bent his wheel the day before, Barlow rode hard and finished out of gas.

Along with the other three region champions, Olson was on the front line but decided to wear his team jersey instead of the leader jersey. His strategy was to be the hunter instead of the hunted. This group was required to ride 2.5 laps, or 19 miles, and that extra half lap proved critical for Olson.

Olson and the south region’s champ separated themselves from the pack from the very beginning and for two laps, Olson rode on the back tire of the other rider. When the two riders reached “the wall,” a 16% grade for 100 yards at the beginning of the third or half lap, Olson not only passed the other rider, he accelerated up and over that hill so convincingly that the other rider was visually devastated. Olson continued to increase his lead to 53 seconds and raised his arms in victory at the finish. All the spectators were impressed and in shock that Olson was able to breakaway as he did and take back-to-back state titles.

In her first year of XC racing and first year of extensive trail riding, Jespersen has been impressive all year in the JV girls’ group. Like most of the Carbon riders, she gets stronger each race. However, Jespersen ran into some misfortune on Saturday. During the second lap, her front tire began to leak. By the time she reached the top of the hill and with about 1.5 miles to the finish line, the tire was flat. Not giving in, Jespersen continued to ride her bike, falling three times around tight corners, the last of which was 100 yards from the finish. Determined to finish, she ran with her bike with nothing left in the tank and finished a respectable 16th out of 98 girls. What would have happened had she not had a flat? Tune in next year.

Carbon is only one of two teams to have multiple state champions this year and the team finished an impressive second in state for Division 3 and 4 schools. What an awesome year of riding. Thanks to the parents, coaches and community for their support. Way to rip, Carbon! 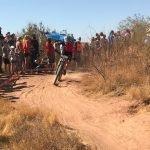 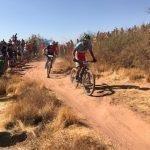 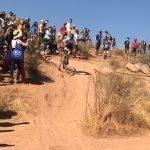 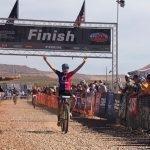 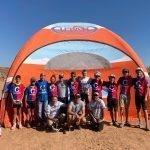 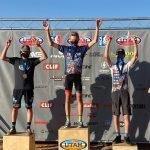 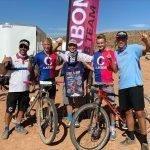 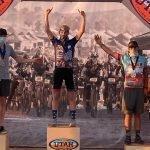 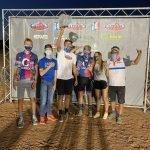 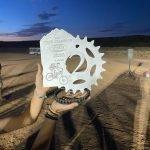