The fourth race of the season was the regional championship and was hosted at Eagle Mountain this past weekend. The course was a long 5.8 miles, demanding both skill and endurance; however, despite this challenge, the Carbon riders put on a good show.

The day started out fast with the top category racers completing three laps. Boyd Bradford led the majority of the race and had to avoid and navigate a crash in front of him to finish in first place. Nathan Engar and Joey Barlow also rode in this group and both placed in the top 20. This effort, along with the other races, qualifies them to compete at the state championships in three weeks.

The next group of riders is the largest with two seniors, three juniors and two sophomores. Rusty Seeley finished in the top 20 and qualified for state while DJ Emerson completed the race and finished his third year riding career at NICA. The juniors and sophomores competed for good placement amongst the group.

Making the most of the opportunity was Spencer Tullis as he moved up to 11th overall. He’s slowly climbed the ladder to the top all season. Tullis and Ryu West finished the season in the top 20 and will be headed to state as well. Sean Stromness, Sam Madrid and Max McCourt rode well and should be proud of their efforts on this difficult course.

Next up were Carbon’s three freshman, Andrew Loveless, Beckham Leonard and Teagan Robison. These three have the toughest time slot, racing in the hottest part of the day, but with their teammates cheering them on, they persevered. Andrew had a breakout race and moved up several spots to take second place by a wide margin, qualifying for state. Beckham just missed the cutoff for state but still had a respectable season as did Teagan. Carbon’s last rider, Lindsey Jespersen, was well prepared for this race and it showed as she moved up a few positions and cemented her position to qualify for state.

Although the riders are individually timed, it is a team effort. In that spirit of team, Carbon MTB team placed first for the third-straight race and claimed the title as Division 3 Team Regional Champs. Way to shred and represent, Carbon! To all 25 riders on the team this year, job well done and congratulations to the eight who qualified for state.

The last race is Oct. 22-23 in St. George for the State Championship where each of the four regions in the state will be represented. If you see one of our riders, give them a high five and words of encouragement; it’s going to be intense. 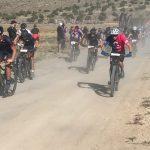 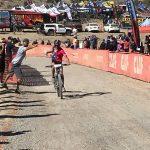 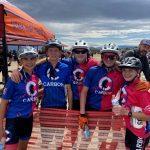