The Carbon School Board meeting took place on Wednesday evening where a lot of positive items were discussed.

One item that was discussed was the recognition that went to a well-deserving bus driver. Chris Nelson drives a school bus for Carbon School District and has driven for a lot of basketball trips. According to Karlene Bianco, principal at Lighthouse High School, “he will do anything for you to make your trip enjoyable.”

The recognition was presented by Superintendent Steve Carlsen because Bianco was at the school for a basketball game. One trip in particular was brought up. The team was on its way home from a Park City trip on I-15 when Nelson noticed a large chair in the road. He kept a cool head and avoided the chair without putting anyone in danger. Nelson was presented with a ticket for a free movie.

School board member Kristen Taylor then spoke on an issue that she takes very seriously. She wanted to put emphasis on how important it is to bring back art to the schools and the curriculum. Taylor explained that studies have shown that art does increase students’ scores. Taylor went to a school board convention where they did an art presentation from students all over the state. Clips were shown of some of the impressive art.

“Art really is a part of our culture and humanity,” Taylor stated.

She then stated that there is a community of professional artists in Helper, and it would be a wonderful opportunity to take advantage of that.

Two board members shed some light on how successful the Sub for Santa program was at Carbon High School in 2015. Over $21,000 was raised by students and teachers for Christmas and it all went back into the community.

“I was amazed at all the hard work and service that was performed,” stated Melanie Fausett.

Another topic that came up at the meeting was brought up when members of the Carbon High Marching Band petitioned the board for help in purchasing new uniforms. A member of the band and the drum major came to the meeting and modeled the new uniform. The new uniforms are more lightweight than before, which makes them easier to play and move in. There are snaps in the arms and legs of the suit to adjust the length accordingly for each student. The board asked the marching band to explore options that would allow them to partially fund the new uniforms themselves and return and report at the next board meeting with their findings. 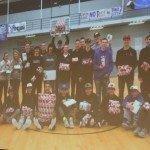 Carbon Students for Sub for Santa 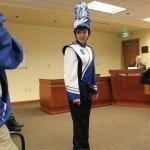