During the Carbon School District Board meeting on Wednesday, the board recognized many athletic Carbon High students and their coaches.

The board first gave the spotlight to the wrestlers on the high school team that placed at the state competition. Coach Brock Fausett spoke about each of the individuals present and how they competed at state. Nathan Cowley took sixth place in his weight class while Keityn Hunt and Bobby Blake both took fourth in their weight classes. Conner Fausett had a close second place finish at state and his coach father said that he was especially proud of his son for doing so well. Coach Fausett then mentioned how proud he was of all his wrestlers and the season they had.

The girl swimmers on the high school team were then highlighted. Coach Allie Chamberlain, who won 3A Coach of the Year, spoke about each of the girls behind her. These girls were Megan Swasey, Alheli Pendleton, Kacee Barrett, Sofie Crompton, Jacee Richards, Emily Jesperson, Natale Van Dyke, Thalyn Lyman, Ashlin Baker, Tyrca Jaramillo, Haylie Powell, Jenna Birch, Logan Odenahl and Lori McCourt. There were many records broken by the swimmers at Carbon High and Chamberlain said that her team “dug down deep and scored enough points to come out in first place.”

The Carbon High girls’ basketball team was then featured. Coach Ted Bianco spoke about what a “special team” of girls he has had this year. All the girls on the team have a GPA average 3.94, most with 4.0 GPA, and they even won an statewide award for this accomplishment. Not only did the team have a high academic achievement to be proud of, they also finished 12-0 in their region. The team consists of Jodi Noyes, Kaytlyn Cripps, Mcenna Blanc, Jordan Bianco, Diana Morely, Lyndsey Madrigal, Katelyn Vasquez, Sydney Orth, Abbie Saccomano, Lyndee Mower, Brenna Tabone, Harley Miglori, Molly Banks, Rhiannon Timmons, Annamaria Cartwright, Cora Lamborn, Stevie Oman, Haylee Prescott, Isabeau Miller, Karli Hillam, Janzie Jensen and Alexandra Cartwright. Bianco then mentioned that state was coming up and that the girls had to play Richfield in the quarter-finals, which they played Thursday evening in Richfield. 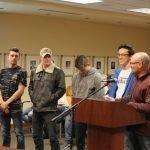 Coach Fausett with some of his wrestlers. 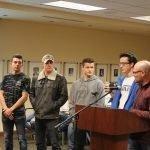 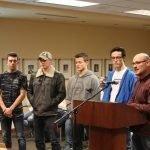 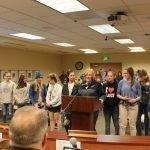 Coach Chamberlin with her girl swimmers. 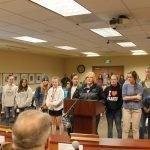 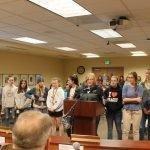 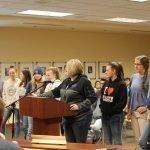 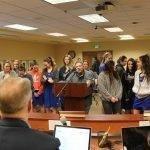 Coach Bianco with his “special team” of girls. 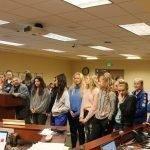 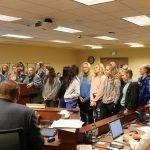 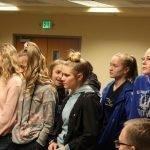 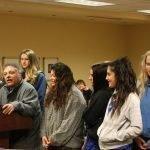 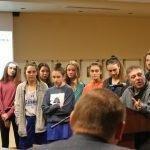