The Carbon School Board hosted a special meeting on Tuesday evening to interview and select who would fill the recently vacated board position. Present at the special meeting were board members Jeff Richens, Keith Cox and Lee McCourt as well as Carbon School District (CSD) Superintendent Mika Salas.

The open position term runs through December of 2024 and three candidates applied for the spot: Brooke Bishoff, Gwen Callahan and Greg Dart. Each candidate began by providing a short background.

Bishoff is from the Salt Lake area and attended Southern Utah University where she earned a degree in elementary education. She worked in schools in Iron County for some time and moved around a bit before ending up in Carbon County, where she hopes to reside permanently. Bishoff is married and shares three children with her spouse. She stated that she wished to join the school board as she is passionate about education and what her children are learning.

Callahan also has three children and is a grandmother to 11. She remarked that she has a broad and long education experience career, which started the day that she graduated from Brigham Young University and moved across the street from what was then known as Helper Junior High.

Callahan graduated with a language arts and physical education degree. She then spent 19 years at Helper Junior High. When she left the CSD, she went to the Emery School District and was the Canyon View Junior High principal for some time before transitioning to principal at Emery High School for nearly 10 years. Callahan expressed her excitement to be before the board and stated that her love for the youth and being concerned about their education motivates her.

The final candidate, Dart, stated that he was grateful to stand before the board and tell them about himself. First and foremost, Dart explained, he is a father of seven children. He and his wife came to Price in 2012 and were parents to four biological children. From there, they adopted three more children, who vary in ages and are scattered throughout the district at various schools.

Dart has spent his career as an educator. He received an undergraduate degree in journalism and went back to where he began for higher education, which was Snow College. He has had extensive schooling and stated that he found a campus that he absolutely loves here in Price at USU Eastern.

“I love it because of the community,” shared Dart. “Carbon County is an amazing place to be.”

Dart stated that Price and Carbon County are home because of people such as his fellow candidates that want what is best for their children. The candidates were then asked a series of questions from the board members that were present.

The questions ranged from asking about their experience in budget and finance to what each candidate thought that it meant to be a responsible board member. When asked what the main focus is as a board member, Bishoff stated that it is ensuring that the district is able to live within the budget that is set. She shared that she would strive to ensure that funds brought in are being used responsibly.

Callahan said that her main focus is having a great communication and bond with the superintendent, the educational leader. She expressed that it is the most important thing that a board can do. Finally, Dart stated that to him, it is important to help create a space where education can happen.

While each candidate brought great traits to the table, the board deliberated for some time before making a decision and welcoming Callahan to the board. 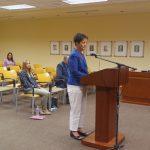 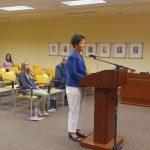 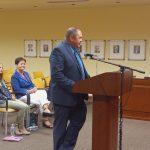 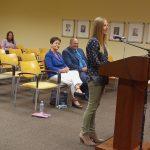 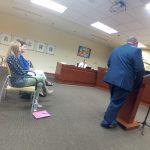