Carbon School District honored long-time and retiring employees, the teacher and employee of the year, and students over two nights on May 7 and 8 with a banquet and program.

The night also brought the announcement and awards for the Employee of the Year (Cindy Ivory) and Teacher of the Year (Cami Carlson).

Ivory, a math aide at Lighthouse High School, is a transplant from Sanpete County who moved to the area 30 years ago because of her husband’s profession. She grew up around education with both her father and grandmother being school teachers. Her mother also taught at Wasatch Academy.

She started working for Carbon District nearly 13 years ago. For 11 years she worked with adult education and now finds herself helping students at Lighthouse.

“I have to say I had a bit of trepidation about coming here to work,” she said. “But now I know this school is the district’s best kept secret. The staff and the students are great here. In fact, some of the kids that I thought were going to be a challenge for me ended up being my favorites. The reward is to see these students gain confidence in themselves and to graduate.”

Her close working ally, Wes Thompson, said that Ivory is “just great” in the work she does with the students and Karen Bedont, the principal at the school, had high praise for her during the presentation as well.

Carlson has spent nearly her entire life either attending or teaching at Carbon County schools. She is a native of the county and attended schools throughout the county and went to her first two years of college at what was then the College of Eastern Utah, where she played basketball after a successful high school career. She then went on to Southern Utah University and majored in English and minored in history.

She came back to Carbon County and got a job right away teaching at Mont Harmon, where she worked for two years and then went on to Carbon High where she has been a fixture at the school and the favorite of many students over her 16 years of instructing there.

“She is great with the kids and inspires them,” said Carbon High Principal Bruce Bean. “She is also very competitive.”

Bean said he first met her when he was a teacher at Mont Harmon and she played volleyball. When she came to Carbon, he was the girls’ volleyball and basketball coach and she became one of his assistants.

Carlson later went on to be the head coach of the girls’ basketball program and was very successful. She eventually left that position because she wanted to pursue her writing, which has resulted in two children’s books. At present, she is working on the concept for a novel involving historical fiction.

“My favorite thing here at the school is the students and my interaction with them,” she said. “They are funny and great. A lot of people give students a bad rap, particularly high school students. They think they don’t care, they’re always on their phones or they’re disrespectful. That’s not true. There are always those kids and unfortunately their whole group gets defined by them. But they are just fun and good kids. I seriously enjoy being with them.”

The next night, it was the students turn to get awards and accolades for their year’s work. Over 200 awards were passed out to students whose achievements merited the attention.

Highlights included awards for the 14 Sterling Scholars and 14 awards for students from Carbon High who achieved all-state academic honors in the 3A ranks across the state. In one set of awards, three golfers (Zade Carrillo, Ryan Gagon and Ryker Smith) were recognized for dominating the golfing academic awards within the classification.

In another academic area, 30 students were given awards for outstanding achievement on ACT testing. Quiz Bowl participants were also honored.

Garrett Bryner was honored for wining the regional spelling bee. He will be heading to nationals this summer.

Three students were also honored for getting their UNAR/CNA Certifications, including Darla Chabes, Mikelle Monson and Makayla Moynier. 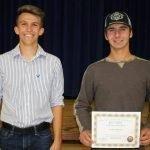 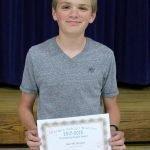 Garrett Bryer will be heading to the Scripts National Spelling Bee this summer after winning regionals. 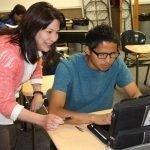 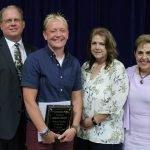 Carbon School Board members Jeff Richens, Lee McCourt and Kristen Taylor stand by Teacher of the Year Cami Carlson during the awards banquet. 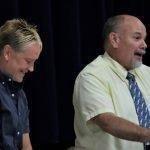 Carbon High Principal Bruce Bean talks about Teacher of the Year Cami Carlson as she stands by during the awards banquet.