The Carbon Dinos swim team recently competed at 3A region where 68 best times helped the Dinos secure victories in many of the events.

The meet started out with breaking a 200-yard medley relay school record by a second and a half. The team consisted of Megan Swasey, Veronica Ibanez, Sadie Crompton and Amanda Liu and grabbing first place in the 200 yard medley relay. The team set the new record at 2:04.36.

The girls finished with a strong 388, coming in ahead of three other teams and being named as Region 12 champions. Carbon’s Emily Jesperson made her self known in the 200-yard freestyle placing third while sisters Shannon and Ashlin Baker placed fourth and fifth.

The Carbon boys fought hard coming in third overall with 220 points, they started out well in the 200-yard medley relay snatching third coming in behind Richfield with a time of 1:57. The team consisted of Tyson Swasey, Josh McCourt, Rylan Chamberlain and Brandon Bardsley.

Chad Laursen represented the boys in the 200-yard free with a fourth-place finish.

Megan Swasey dominated in the girls’ 200-yard IM with first place and dropping five seconds. Kacee Barret came in behind Swasey with a third-place finish.

The boys’ 200-yard IM had two finishers: McCourt, who placed seventh, and Kinnion Lyman placing behind at eighth.

Liu returned in the 50-yard free to secure a third place and teammate Kaisha Lott coming in fifth with Jacee Richards coming in seventh.

Chamberlain returned for the boys with a fifth-place finish in the 50-yard freestyle and Dallen Tweddell coming in tenth.

Ibanez, Crompton and Barret all returned in the 100-yard butterfly to be in the top three.

Chamberlain appeared in the 100-yard butterfly as the lone Dino and grabbed first place by dropping four seconds.

Ibanez had a notable performance in the 500-yard free with 5:56, fast enough to grab first. Jesperson dropped eight seconds and came in behind Ibanez, receiving third.

Lauresen continued to dominate in the 500-yard free with a second-place finish.

McCourt, Kinnion and Bardsley worked together to bring home a third place victory.

Megan Swasey and Shannon Baker were able to return in the 100-yard backstroke to grab first and third with teammate Taycie Davis coming in ninth.

Tyson Swasey led the boys in the 100-yard backstroke to grab third and Matthew Torres came in behind Swasey with an eight- place finish.

Crompton bounced back in the 100-yard breaststroke to cover distance to grab second and Lott coming in after.

McCourt and Lyman came within seconds of each other but were able to grab fifth and eighth place.

The relay team of Liu, Megan Swasey, Shannon Baker and Ibanez grabbed another team victory in the 400-yard free with a first-place finish.

The boys excelled in the 400 yard free relay to grab second with Bardsley, Laursen, Chamberlain and Tyson Swasey representing.

The top five finishers in each event received a medal and will represent Carbon at the state competition. 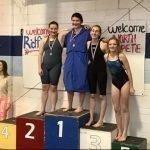 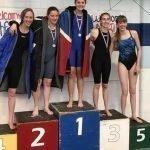 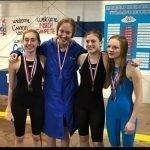 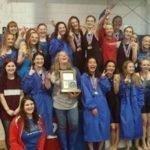 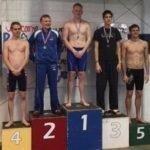 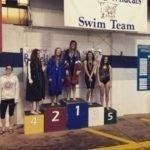