Pictured: The Raptors, a local travel baseball team, were named as this year’s champions at the 2016 Endless Summer Tournament Champions in St. George. Photos courtesy of John Vasquez

At the 2016 Endless Summer Tournament hosted in St. George, the Carbon Raptors brought home a first-place finish, coming out with a clean 5-0 sweep.

In the Raptors’ first match, against the St. George’s Scorpions, the local traveling team took the victory 11-8 as it handed the Scorpions their second second loss against a Utah team. Also on Friday, this time against Beaver’s representative, the team managed to score a victory, 13-6.

On the second day of the tourney, in the Raptors’ third match against the Scorpions’ gold team, Carbon flew past the competition and walked away with their third win, 21-9.

Then, in a close battle, the Carbon team faced off against the Santaquin Black Hawks as its penultimate match before the championship game. The Black Hawks, who frequent various tourneys, were unable to stop the Raptors who moved on to the championship with a 12-7 victory under their belts.

Carbon then faced off against the St. George Roadrunners, who were also 4-0 at the match, as the number two seed for the championship title.

The Raptors continually lagged behind their opponents in the game with scores bouncing between 4-2 in the first as second all the way to 9-5 after the fourth.

Carbon finally was able to warm their bats at the bottom of the fifth as they picked up five more runs to give the team a one-point advantage, which stayed throughout the inning as the team’s defense kicked in and kept the Roadrunners from scoring.

Carbon’s bats continued their magic in the sixth and, in the bottom of the inning, scored three more and moved the distance between them and the Roadrunners. The Roadrunners’ final chance to take their lead back was squashed again by the Raptors’ defense. The Raptors took the game with a final score of 13-9.

The victory came as a welcome change for the team who, last year in the same tourney, faced several losses at the hands of opponents.

“Every kid contributed up and down the line,” one of the team’s coaches, John Vasquez, said.

Coach Vasquez also praised the team’s pitcher, Maddux Hart, who took the win. The entire team is made up of 11 eight-year olds and one seven-year old. 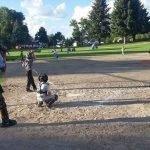 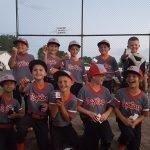 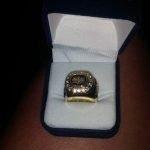 A picture of the championship ring given to the winners.