Jeff Hill has been building and flying model airplanes for 30 years.

His planes run on nitromethane, which costs around $25 a gallon. The same fuel could be used in a car and would give the car an enormous amount of power. Hill used the example of a street race between a Toyota Corolla and a Chevy Corvette.

“If you use this fuel in the Corolla, it’ll win every time,” he said.

Hill also explained that this fuel won’t damage the engine since manufacturers put some oil in it to lubricate the engine like two-cycle fuel. The oil is what spectators can see trailing behind the plane in flight.

He started flying control line planes when he was 12-years-old. When he switched over to motorized radio control (RC) planes, he crashed them for four years.

“I knew how to fly planes and no one was going to tell me how,” he said. He then switched to gliders, which helped him learn to fly better.

A lot of pilots don’t like to fly in the wind, but Hill loves it. The main reason he loves it is because he can “kite” his plane. Kiting is where the plane flies into the wind and matches its speed with the opposing speed of the wind, making the plane appear stationary in the air.

“Kiting sometimes causes the engine to stall and the plane to drop out of the air, so it can cause the plane to crash,” Hill said.

Like any good pilot, Hill performs a preflight check on all of the plane’s surfaces. One such plane has four servos, which each controlling a part of the plane, including the rudder, front-wheel steering, throttle and elevator.

Hill flies a fuel plane because he has longer flight time.

“When I started, the electronic planes had a 20-minute flight time,” he explained. “They’ve improved since then but I still have a two-hour flight time.”

Hill even demonstrated that his plane didn’t need to have the engine on to continue in flight. He explained that a pilot can catch a thermal and ride it as long as he wants to.

Hill uses a four-stroke engine with valves that act like a diesel. Diesel engines don’t have spark plugs. Instead, they ignite fuel by compression. This engine has to use a glow plug to start the engine, which is like the igniter in a gas oven. It glows red to ignite the fuel. After the engine is started, it will run until the fuel runs out or the pilot kills the engine. The plane shown in this article uses an engine that normally costs $500. The engine provides about three-quarter horsepower. The plane has an eight-foot wingspan and a three-blade propeller.

The plane has a removable wing, which is typical for model airplanes.

“It just makes things easier to store and haul around,” Hill said. He attaches his wings to the fuselage using six large rubber bands on each side.

The range of the radio transmitter is one mile.

“You’d never go that far because you can’t see what you’re doing,” Hill said. He pointed out that the pattern on his wing tells him which side of the wing is which.

At one time, Hill said he had 20 planes but he gave away about 15 of them.

“Most modelers have a bunch of planes,” he stated.

Hill also likes to entertain the people at the Carbon County Senior Center, which lies directly east of the model airfield.

Hill also explained the difference between a glider and a sail plane. A glider is designed to return to the earth while a sailplane is designed to catch thermals and remain aloft as long as possible. He spoke about a competition once every five years of sailplaners flying from New York to California before sundown using only thermals for lift.

“The helicopter adds another dimension,” he said about the quadcopter. “They are remarkable, they are different, but they aren’t airplanes.” 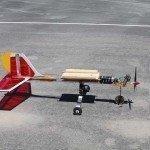 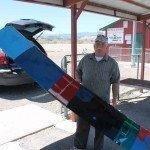 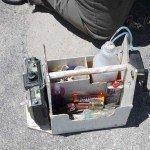 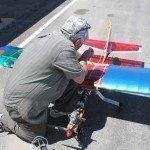 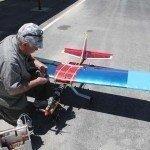 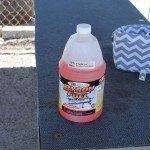 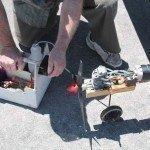 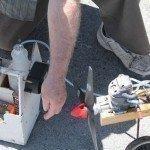 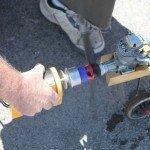 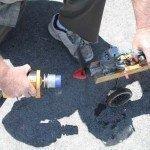 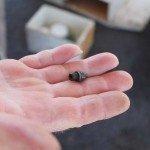 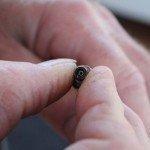 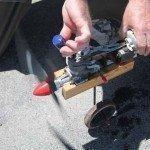 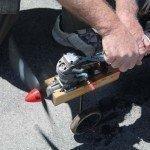 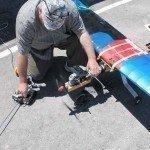 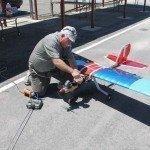 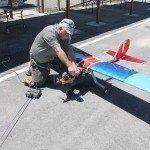 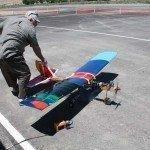 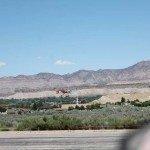 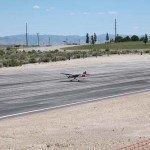 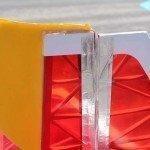 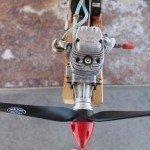 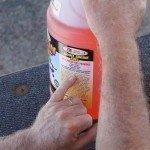 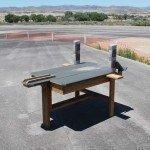 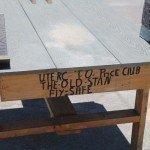