On Thursday, Dec. 3 at 5:30 p.m. beginning at the Blue Sage Arena, the Castle Dale Library kicked off a Mini Santa Run. Through the month of November, KUED holds its annual reading marathon. KUED offers libraries that are more than 100 miles away from Salt Lake City an opportunity to hold a Super Reader Party for the participants of the KUED Reading Marathon. Castle Dale Library received a $500 mini grant. This is KUED’s 28th Annual Reading Marathon.

The grant funded A Minute To Win It competition with the children throughout the month of November as well as a Super Reader Party. Castle Dale Library planned its party as a mini Santa 1k Run. Anyone can view their Minute to Win It competitions on their Facebook page at Castledale Citylibrary. Each participant was gifted a soda and a candy bar for competing.

Librarian Roxanne Jensen met with the Castle Dale City Council to request fire trucks for an escort through town. Not only did they supply the trucks and fire fighters, but they also donated $100 for the contest.

Participants received glow sticks and toys before the run. Santa showed up, rode on the fire truck and the racers were off.

After everyone arrived at the library, a drawing was held. The participants who had read 20 minutes each day through November were entered into a drawing to win an electronic doodle board. There were seven winners, including Asher Bohn, Mara Meyers, Aliscia Taylor, Leland Carter, Mason Carter, Jaxon Bohn and Harvey. Then, the children were able to walk up to Santa’s sleigh and tell Santa what they wanted for Christmas.

The Castle Dale Library would like to thank Castle Dale City, Castle Dale Fire Station and especially KUED for the opportunity to host this event. 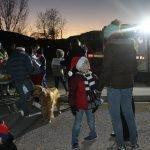 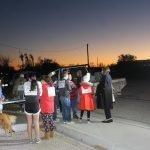 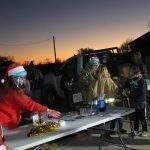 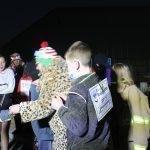 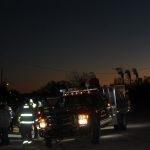 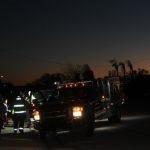 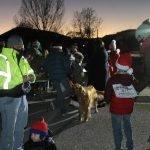