If there was ever happy man, it is Jared Humphrey.

Humphrey, a former student and presently an employee at the Castle Valley Center, hardly has a thing he does at work that he doesn’t like. In fact, his common expression about everything he does is, “I love it.”

“I have never seen anyone with a more positive attitude about life,” said school head custodian Don Garrett. “Jared is always happy.”

Humphrey began at the school (when it was the old Ann Self School in Spring Glen) as a student when he was only four or five years old. Principal Mike Keller remembers.

“He came to us and was always positive regardless of what happened here or in his life,” said Keller. “One of the things he likes to do is to walk into a meeting and to pick up the trash can. He always says hello to everyone in the meeting.”

Humphrey’s work and attitude can be seen throughout the school as people greet him. He works during the day, helping small children with motor skills and reading, and in the afternoon, he turns into a custodian and does his rounds gathering garbage and doing other duties.

In the classroom, Humphrey has a a special way with the little kids he works with. They seem to adore him and he can relate to their capabilities.

A fixture at the school where it is now located, Humphrey knows everyone and if he doesn’t, he soon does. His social, outgoing personality is a spark in the school that many love.

“Besides the kids, he also does a lot with the adults who come to school here,” said Keller. “He always takes part in the dances and participates in many of the other activities in the school.”

One of the things the Emery County resident is famous among school personnel for is his eating, or more to the point, his love of food.

“My favorite food is chicken fried steak, mashed potatoes and root beer,” said Humphrey after prompted by his fellow workers to say what he liked to eat.

Garrett confirmed that. “He does love it,” he said.

Keller said that one time, the school took a bus of students to the Utah State Fair and they were eating breakfast on the way. Humphrey came up to him while they were having that meal and asked what they would be having for lunch.

In the classroom, the teachers and aides say he is a huge help. His positive attitude with kids who have multiple physical and developmental challenges makes them all smile.

As one follows him around on his rounds, he looks for what he can do to help. When he does something or helps someone, he says it again and again.

“I love it,” is the expression he always uses.

And he not only says it, he shows it. 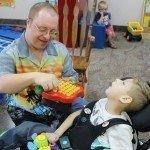 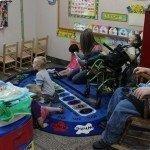 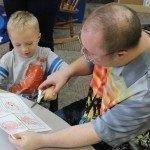 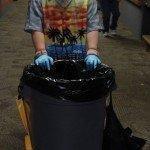 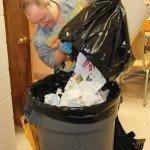