Over one hundred fishermen and women gathered for the second annual “Catfish on the Green” tournament in Green River on Friday. Some of the participants came from as far as Michigan and New Mexico to compete for thousands in cash and prizes. Each participant also received a “See you on the River” custom t-shirt.

Due to the generous donations by these sponsors, the event was able to raise $1,065 from drawing tickets for the Green River PACT organization to help fund the organization’s many projects. PACT’s new director was in attendance to speak on PACT and thank the fishermen for their contributions.

This year’s winners for the individual category were Daxton Cook in first with a 22 7/8″ catfish, Mike Mortensen in second with a 22 1/4″ catfish and Jose Lozano in third with a 21 3/4″ catfish. Fourth place went to Mike Cloward with a 21 3/8″ catfish while there was a tie for fifth place between Stephanie Penrod and Jason Harvey with cats measuring 21″.

This annual event is scheduled to take place in Green River every August. 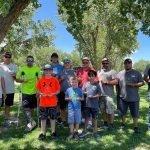 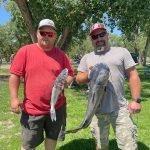