At Wednesday evening’s Carbon County Commission meeting, a Carbon High School athlete was recognized for his superb performance at the 3A State Golf Tournament.

Commissioner Tony Martines spearheaded this recognition for sophomore Bode Salas. He welcomed Salas and his coach, Robbie Etzel, to speak about the season. Etzel thanked Commissioner Martines for the invitation and said that it was a great opportunity to congratulate Salas.

He stated that they wrapped up the 3A Golf season in October and could not have asked for better support. Then, Salas took the podium to discuss his victory in the tournament.

“It was one of my biggest dreams, for sure,” Salas remarked.

Salas has been playing golf competitively for nearly four years and stated that his freshman year was not as he had hoped when it came to the state tournament.

“We definitely grew as a team,” Salas said.

Then, Commissioner Martines spoke, stating that Salas was being modest and that the Utah High School Athletic Association has been keeping record since 1948. According to their records, Salas was the first from Carbon County in 72 years to win state. His name was featured in the book twice, the same accomplishment a now-professional golfer holds.

“It’s quite an accomplishment for somebody that’s been golfing for such a short time,” Martines commended.

Salas was then presented with a certificate from Commissioner Martines to commemorate the victory. 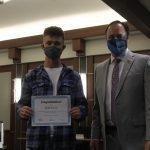 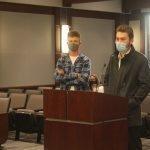 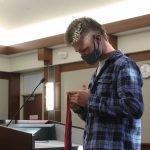 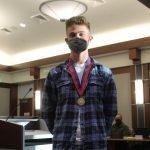 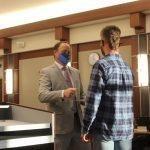