A total of 15 out of the 28 debate team students at Carbon High traveled to Richfield on Saturday to take place in the hosted school tournament. This particular tournament marked the end of a circuit.

There are about 10 schools in a circuit with four different tournaments that lead up to the conclusion of the circuit. For the last tournament, all points are added up and a trophy is awarded to the top finishers.

Carbon High School started the tournament 30 points down and were 13 points ahead to place after the second round. The team took third in the school tournament as well as third in the CUSDC Circuit.

Up next for the school’s debate team is a trip to the National Qualifying Tournament that will take place at Beaver High School on Feb. 16. Those that place at this tournament will be invited to the national event in May. Region will then take place on Feb. 23 at American Leadership Academy with State following close behind on March 8 and 9. The national tournament is then slated for May 25 and 26 in Wisconsin.

Debate coach Katherine DeBry took over the program the previous year from long-time coach Gail Scoville and stated that the students have been preparing diligently for the competitions.

“Everything we have been doing has been practice for region, state and the national qualifier,” DeBry stated. “The kids did really well; we won a lot of trophies at this tournament. I am so proud of them.” 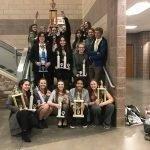 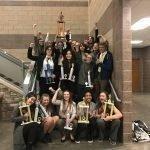 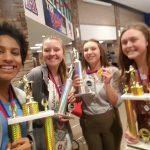