For the inaugural 2021 Carbon School Board meeting, items were kicked off with the swearing in of new school board member Keith Cox, who recited the oath in the presence of the audience and his fellow board members.

Following this, there was a recognition for the Carbon High School (CHS) marching band and color guard. The time was turned over to Chris Sweeney and Adam Cunningham, who shared that this year the team placed third in 3A. The percussion group was the state runner up in their category and the color guard was 3A state’s second place.

They competed in five statewide competitions and placed in the top three at each one. With the new realignment from the Utah High School Athletic Association, they will compete once again in 3A and already have a new and competitive halftime show selected.

The team was credited with doing all of the hard work while Cunningham and Sweeney watch them work for their successes. The board thanked the marching band and color guard for their dedication and stated that it is reflected in their success. The students were then given certificates for the local movie theater by the board. 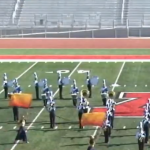