A total of 46 students ranging from kindergarten up to fifth grade participated in the contest by either writing a book or illustrating another student’s book. From there, Emery High School students were tasked with judging the books and selecting two grand prize winners as well as a singular winner from each class.

The two books that were chosen for the grand prize will be published, but the awards did not stop there. The grand prize and classroom winners also received a monetary prize.

All participants in the writing contest celebrated with a root beer float party on Thursday, May 9. 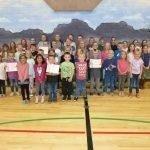 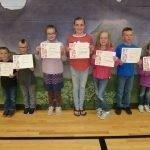