Silicon Slopes East has been hard at work to create a co-working space within the Business and Technical Assistance Center (BTAC) in Price. This project is being made possible by the Governor’s Office of Economic Development (GOED). BTAC Manager Michael Bryant stated that the progress is going well and it is anticipated for the Price location to be completed within the next two or three weeks.

In the space, there will be five privacy booths and 12 lounge chairs with tablet desks. In addition, there will be 20 rolling fold-up tables for various configurations of work settings as well as a lounge area and a small conference room that accommodates eight to 10 people, or four to six with social distancing. A larger meeting room will also be constructed to accommodate 50 to 60 individuals.

Bryant stated that the project is anticipated to be available fully within the next two or three weeks, with hopes of scheduling a grand opening in August. However, at this time, that date is yet to be determined.

“We plan to have a homework hub and virtual reality room. The large meeting room has folding chairs and rolling tables. Other features will be added in the future too, such as printing, scanning, copying,” Bryant stated.

The fees for using the space will be utilized through a flexible schedule with daily, weekly and monthly rates. 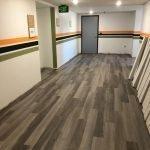 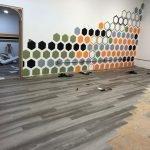