Carbon County Commissioners displayed their support of Resolution 2014-03 by wearing tinfoil hats after an article in the Salt Lake Tribune placed them in “the tinfoil hat world”.

The Tribune article by Paul Rolly reviewed the recently passed resolution by Carbon County Commissioners about the law enforcement powers within the county.

Rolly’s article states, “In the spirit of Cliven Bundy, the Carbon County Commission has passed a resolution declaring itself the sovereign authority within the eastern Utah county and that any attempt at law enforcement by a federal agent would be viewed as a ‘threat to the health, safety and welfare of the citizens of Carbon County’… Carbon County now joins LaVerkin in the tinfoil hat world.”

In addition to these remarks, the article quotes a retired Bureau of Land Management official who questions the county’s resolution with apparent sarcasm. “I worked in recreation on BLM lands for many years. Little did I know that if I found a person pinned under a burning ATV, I was to stand down and request county permission to intervene,” he stated.

County Commissioner John Jones responded to these comments at a meeting Wednesday by stating the purpose of this resolution. “A resolution states the facts of how they are,” he said. “So what we did was made a list of those facts and had our attorneys look at it. We want (the government) to know that if they come in here, they need to live by the rules and not come in here blazing their guns as they’ve done in other areas, but they need to go to the sheriff’s office.”

He continued by saying it’s important to protect the people’s rights in this county by declaring the expectations. “That’s what a resolution is,” he said. “It’s an opinion statement that says this is how we read the law and this is what we expect.”

Upon proposal of the resolution on June 4, Carbon County assistant attorney Christian Bryner said this resolution serves as a reminder of the laws already in place. “This resolution doesn’t purport to make new law,” he said, “but the federal government should respect the law.”

The county commissioners also approved and passed Resolution 2014-04, Wednesday, for the purpose of terminating Carbon County’s participation in the Utah Counties Indemnity Pool, as well as passed and approved the county’s budget. 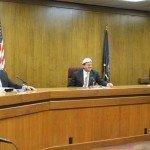 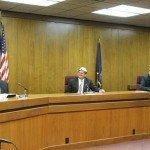