A continuance of the previous consideration for Carbon County to vacate roads and rights-of-way in the Scofield Campsite Subdivision took place at the Carbon County Commission meeting on Wednesday. Commissioner Casey Hopes stated that additional information was received since the last meeting. With that information, Hopes prepared a motion.

The motion was for the county to vacate the roads based upon certain grounds. The first is that there is a good cause to vacate the roads. Hopes stated that the residents of the campsite have maintained the roads for over 34 years and have exercised control and established rules. Hopes further explained that the right to control the road is tied to the ability to maintain the order within the subdivision.

He further explained that the roads are not needed by the public to access the beach of Scofield reservoir. Another stipulation to the motion being passed was that no individuals may be harmed by this being accepted. Comments were considered by the campsite owners and information was provided before the decision was made. It was decided by the commissioners to have the county vacate the roads.

Another agenda item for the commissioners was the consideration and approval of fire agreements with the cities. The agreement entails one payment that would be made by the county collectively which the cities would divvy out between themselves according to the agreement. It is a seven year agreement that would commence this year and covers all types of things that the fire department may do or assist the cities with.

The agreement will occur annually and parties may withdraw if they are unhappy in the future. This does establish that the county will continue to rely on the cities for protection. The county will pay $190,000 this year and that amount will increase by $12,500 over the next five years. The agreement was approved.

A separate fire agreement between Carbon County and Scofield was then discussed. County Attorney Christian Bryner spoke with the commissioners on this, stating that a contract has been established with Scofield which is something that has not happened in some time. The contract provides that Scofield will render whatever services they are able to out of their department as needed. They will be paid on a per-incident basis with rates that are in effect at said time.

Carbon County Emergency Operations Director Justin Needles spoke on this as well. He stated that, as Scofield is a small community, they are short-handed. To limit liability they are listed as defensive action. They do not have the manpower to enter a structure. Instead, they will get all things necessary set up in order to assist the other fire departments. This was approved by the commissioners as well. 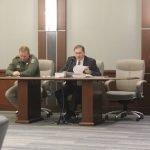